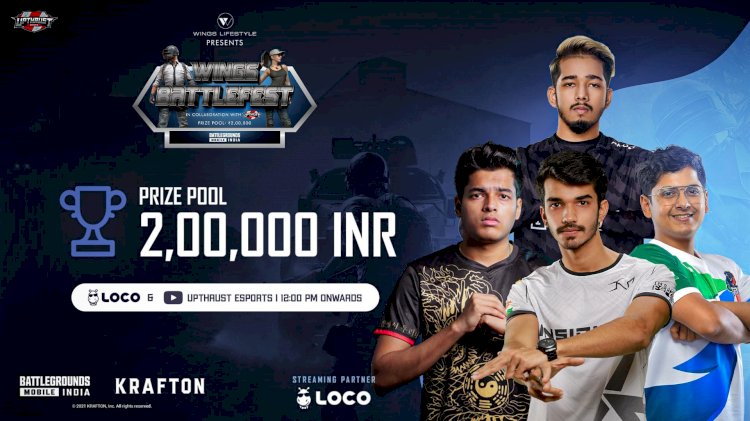 Upthrust Esports, one of the leading Indian Esports organizations and broadcasting company have announced another exciting tournament for Battlegrounds Mobile India in partnership with audio electronic company, Wings LifeStyle. The tournament is dubbed as Wings BattleFest. The tournament features a prize pool of INR 2,00,000 with a total of 27 teams battling it out for the ultimate championship. The tournament is also supported by Loco, India's leading gaming and streaming platform as its streaming partner.

The tournament will commence on the 27th of September 2021 and will take place for a period of 5 days eventually culminating on the 1st of October 2021. The event has been divided into two phases, the Semi-Finals, and the Grand Finals.

The Semi-Finals will feature a total of 27 teams who have been divided into 3 groups  A, B, and C with each group featuring a total of 9 teams. The teams will compete in a round-robin format for a period of 3 days, at the end of which the Top 16 teams from the overall leaderboards will qualify for the Grand Finals.

The top 16 teams from the Semi-finals will qualify for the Grand Finals. The teams in the finals will battle for a period of two days to determine the winner.

Where and When to Watch:

The tournament will be live-streamed every day from the September 27 to October 1 from 12:00 PM for Semi-Finals and 3:00 for the Grand Finals on the official YouTube and Loco channel of Upthrust Esports.

Viewers will be able to participate in daily giveaways to get a chance to win Wings Phantom Gaming Headset.