The eight teams in the Red Bull Flick 2022 India Finals on 22nd June will face-off in a single-elimination bracket to decide the champions which will advance to Copenhagen. 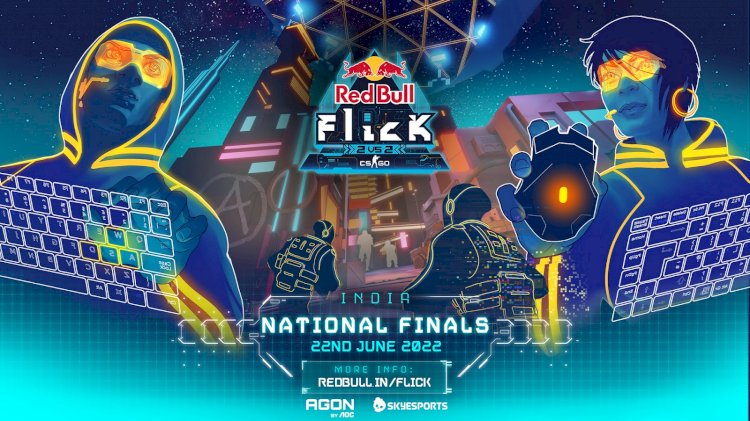 Red Bull Flick returns for 2022, with custom maps and a new futuristic narrative, the ultimate CS:GO tournament is back! The tournament in India witnessed skilled duos battle it out in online qualifiers on 18th and 19th June. The top-4 teams from each qualifier will compete in the national final on 22nd June, where the winner of the tournament will be determined and announced as the Red Bull Flick India 2022 India Champions. The winners of the national finals will advance to the Red Bull Flick Pre-Stage Qualifier in Copenhagen. Here, they will face representatives from over 30 countries with the top six making it to the Red Bull Flick Copenhagen Invitational, where they will be up against 10 invited duos.

The ultimate test of skill and teamwork awaits at the Red Bull Flick Copenhagen Invitational (November 16th-20th), where they will take to the stage in front of the world. Taking place in Denmark, this year’s Invitational keeps the Nordic theme, with last year’s event held in Helsinki, Finland. This year is no different, with duos from the world’s top teams forming the ten directly invited teams taking part.

Red Bull Flick adds a twist to the usual 5v5 gameplay CS:GO is known for. The game mode features capture points, with each duo exploring unique gimmicks found on the maps. Keeping control in teams of two requires expert skills, adaptability and most importantly flawless teamwork. With each player taking on multiple roles throughout the game, fast reactions and quick callouts are essential. The concept for Red Bull Flick began in 2019 as a local event in Turkey and is now a prestigious global tournament, with duos from the world’s biggest teams competing.

The eight teams in the Red Bull Flick 2022 India Finals on 22nd June will face-off in a single-elimination bracket to decide the champions which will advance to Copenhagen. The eight teams are as follows:

The India Finals will take place alongside the OG Reunite like last year where ex CS GO players come and participate in an invitational brought to you by Red Bull and Skyesports India. OG Reunite will feature the following invited players.

Keep your eyes on the Skyesports YouTube channel on 22nd June at 2:30 PM IST to witness the pros fighting out to emerge as the victors. The event will be broadcasted in English, Hindi, and Tamil. Players can also watch it on their favorite creator’s/player’s YouTube channel.

Shiva Nandy, Founder and CEO, Skyesports said,“Last year, the Red Bull Flick India was a huge success and we are thrilled to associate with Red Bull again for 2022. We have an active and dedicated CSGO community in the country who have been waiting for an event like this. I am excited for this edition as the stakes have increased with the winner directly going to Copenhagen.”