Apart from the PS5, only the DualSense controller from accessories will be available to order.

Ever since the launch of this next-generation console in November, it has been a big hit throughout the world. In fact, only within two weeks after the launch, Sony called it the "biggest console launch ever". However, the PlayStation fans from India had to wait a little longer to get the hands-on Console. It was available to pre-order in India almost after two months down the line after the initial launch. The first pre-order sale led most of the fans to feel disappointed as the majority of them failed to grabbed one. Only the standard disc version of the console which is priced at INR 49,990 in India was up for taking in limited quantities which started to ship in early February. Since then, the attractive console made a short appearance last month on Reliance Digital and has stayed Out of Stock across all the other authorised retailers for most of the time of the year.

Although, the wait seems to be over now because according to IGN India the console is returning in stock and is all set to be available for pre-order at 12 pm on the 17th of May. The quantity of stocks seem to be unknown but considering its country-wide lockdown, again it is expected to be in tiny numbers. The report also notes down that the INR 39,990 priced Digital Edition of PS5 will make its India debut and will stay exclusive to ShopAtSC.com. 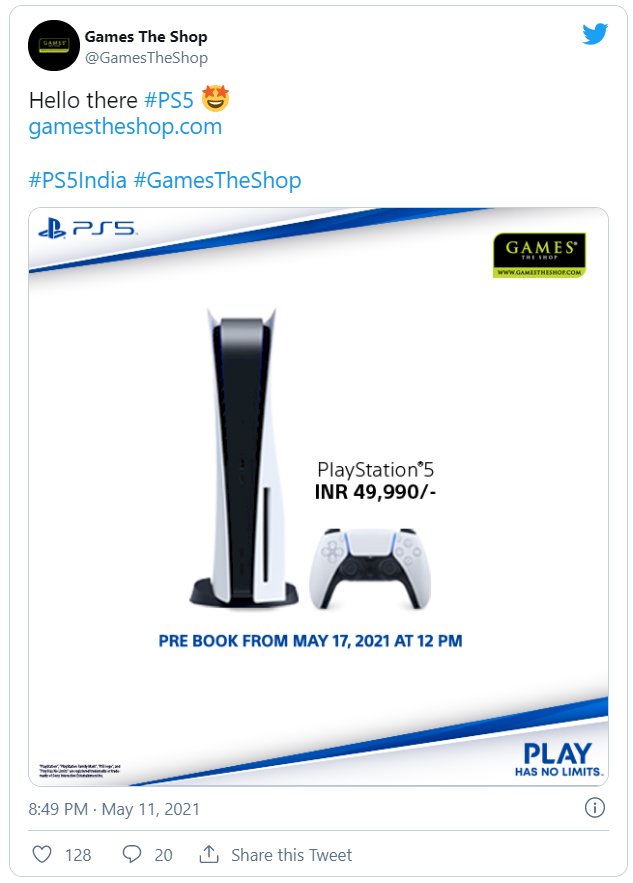 Following the report,  authorized retail partner Games The Shop confirmed the news in an official post on Twitter.

Apart from the console, only the DualSense Controller from the accessories will be available with the console. The PlayStation enthusiasts who seek to amplify their console experience with the shiny Pulse 3D Wireless Headset or the HD Camera need to wait for more for the time being.