Scam 1992's lead cast Pratik Gandhi and Shreya Dhanwanthary showed up for a game with Ajju Bhai to play some Free Fire and share some insightful information that happened between the shoot of popular web series. 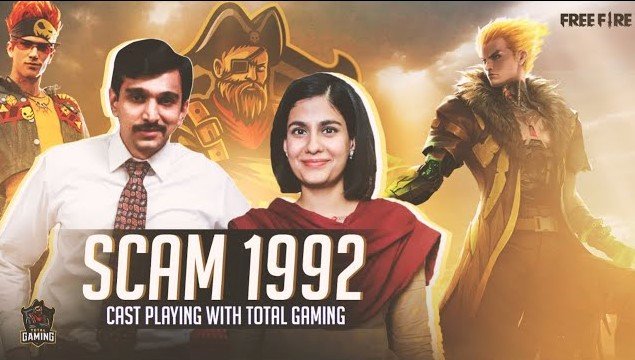 Total Gaming, widely known as Ajju Bhai is one of the most popular content creators from India. He's also majorly known for spending his time within Garena's popular title Free Fire. Ajju Bhai has a solid social presence with extraordinary numbers - 16.2 million subscribers on YouTube, 2 million on Instagram.

While on the other hand, sensational web series "Scam 1992 – The Harshad Mehta Story" has been in talks within the youth and is well-received by the audience, thanks to its real story of the stockbroker Harshad Mehta himself and it is based on the book, The Scam: Who Won, Who Lost, Who Got Away.

Recently, the lead cast of the trending web series Scam 1992, Pratik Gandhi and Shreya Dhanwanthary collaborated with Total Gaming a.k.a Ajju Bhai to play Free Fire. Ajju Bhai's questions towards the cast gave some insightful information, he started with asking actors about how was the experience portraying the characters for which both of them said that they had their own difficulties because they were going to reflect real personalities.

When asked about Stock Market knowledge, Pratik and Shreya both had a hard time understanding it but Pratik cites that it is an "interesting field",  he has become familiar with it to an extent and suggest that without taking the short route/or risking out on money its a good place for "long-term investments" for nice returns.

However, Pratik got knocked off out by not making into the play zone in the later moments of the game whereas Shreya and Ajju Bhai finished the game with 16 kills Booyah in their name.