Legendary commentators Sanjay Manjrekar, Aakash Chopra, Vivek Razdan, Danny Morrisson, and Lisa Sthalekar have been brought in to add drama and excitement to the on-field action. 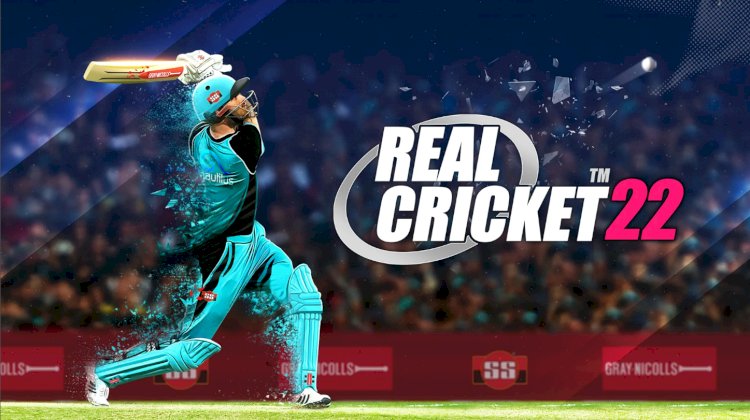 It is inevitable that cricket video games will gain more notoriety in India, where there are millions of gamers and more than 600 million cricket fans. Real Cricket™2022, the newest instalment of the well-known gaming franchise from JetSynthesys' Nautilus, has just been released, adding to the current cricket craze.

With over 205 million lifetime downloads, the newest game in the franchise will help the franchise's growth trajectory even further. With real-life-sized stadiums, motion-captured animations, and manual fielding, the game provides unparalleled realism, making it a must-have for any cricket fan. Legendary commentators Sanjay Manjrekar, Aakash Chopra, Vivek Razdan, Danny Morrisson, and Lisa Sthalekar have been brought in to add drama and excitement to the on-field action. Additionally, using the Shot Map section of the game, players can map their desired shots to suit their unique batting style.

Speaking on the launch, Anuj Mankar - CEO, Nautilus Mobile App, said, “Real Cricket™, has the potential to be India’s esports export to the world and with Nautilus Mobile being ranked as the #1 grossing simulation-based cricket gaming franchise across the globe – it is our responsibility to provide an unmatched experience to players. Real Cricket™ 2022 is more real than ever giving the players an immersive experience with a complete engine overhaul. We are positive that the players will enjoy the more challenging and in-depth gameplay like they always do. It is impossible to replicate the physical skills required of the real sport on the mobile phone but what is possible is to replicate the mental and strategic skills required. It is with this vision that we have created multiple elements to truly push the limits of cricket simulation on the phone and throwing is further down the e-sports spectrum.”

Talking about the launch, Rajan Navani, Founder and CEO, JetSynthesys, added, “In the esports landscape, there is a constant conversation around casual games, mid-core, and core games. Skill-based cricket gaming especially has immense headroom for development owing to the mass popularity of cricket and mobile gaming. Taking cognizance of this fact, we are indeed excited to launch Real Cricket™ 2022. The all-new avatar will elevate the gaming experience and will have players coming back for more. We believe Real Cricket™ – the game and championship – will attract more viewers and position cricket as a credible skill-based gaming option.”

With over 210 million downloads, Nautilus Mobile is currently the highest-grossing simulation-based cricket gaming franchise worldwide. According to App Annie, since April 2019, the Real Cricket and Sachin Saga franchises from JetSynthesys have a combined 65% market share, compared to 35% held by the closest competitor. A national level esports competition featuring Real Cricket 20 was held as recently as February and attracted over 100,000 players. The competition continued for 4 months and culminated in a national final where the winners shared a prize fund of Rs 20 Lakh.

Real Cricket was one of only three Indian-made games to appear in the coveted list of "Games that Inspire on Google Play" in August as part of Google Play's 10-year anniversary. Upon release, Real Cricket 22 shot to the top of the Apple App Store's Top Free Games List.