An exclusive campaign initiates #JointheQlan to encourage the gaming & esports community to meet, connect and get discovered through this App 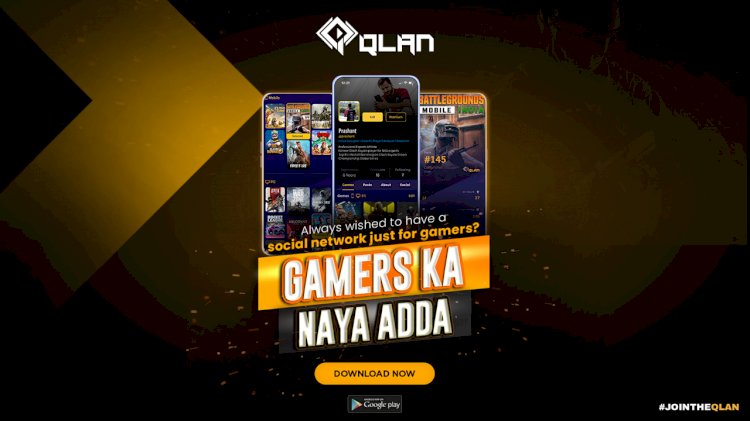 Adding an edge to the esports segment, Qlan, an interactive social networking app dedicated for gamers, announced their successful launch on Google Play Store with 50,000 pre-registrations on Thursday. The exclusive platform presents a whole new approach to connect and engage with the gaming and esports community with a vision of creating a robust and sustainable ecosystem.

The platform is developed for gamers, gaming professionals, squads, orgs, tournament organizers, content creators and other stakeholders in the industry to build, find and exchange value to further their growth. The brainchild of Sagar Nair, co-founder and CEO, and Navin Talreja, co-founder and CBO, Qlan, envision the growth of the esports industry while being one of the enablers in the process.

“It is a surreal feeling to successfully launch Qlan. Gaming and esports is our passion and we understand the massive potential that this segment has. While in the existing social setup, gamers and the esports ecosystem were unable to address various issues like making the right connections, proper recognition for their in-game talent, a structured system for players and skilled individuals to showcase their skills, creating and sharing content in one designated gaming only platform. The idea is to unite the existing fragmented communities and facilitate value exchange amongst them. These lacunas in the existing social system obstructed the right talent from getting tapped. And that is what prompted Qlan’s inception, it will address existing grassroot problems that the gaming ecosystem has been facing in the social space all this while,” Sagar Nair, Co-founder and CEO of Qlan said after the launch of the App.

It is a genre-specific one stop networking app with some of the key features like:

This AI-based networking app offers the stakeholders in the business and the thriving esports community to meet, communicate and get discovered. Providing optimum opportunities to new prospects while augmenting the industry further.

“We are eagerly looking forward to how our early users respond to Qlan. After months of research and gathering insights by conducting various pro-to type surveys and trials we were able to understand the existing, unattended problems, and that motivated us to come up with the solution—QLAN. Qlan is built with a focused vision on uniting the key stakeholders in the industry to build, find and exchange value to bolster their own communities and business. We believe it would prove to be an industry game changer. Whether you’re looking to go pro, find your esports squad, seek professional opportunities in the industry, in Qlan you have a trusted enabler for anything you want to achieve in the gaming and esports space” said Navin Talreja, Co-founder and CBO after the launch.

With the successful app launch, Qlan envisions becoming the most trusted and secured platform for the gaming and esports community. The app is currently accessible to android users and it plans to soon launch the app for iOS users as well.