PUBG Mobile will not be accessible from 30th October in India

PUBG Mobile and PUBG Mobile Lite were announced as banned by the government being one of 118 Chinese apps involved over concerns of security, surveillance and data privacy. However, the game was accessible by existing users. The announcement of the ban came as a shocker to the Indian audience as the game itself had a huge following in the country.

Although, today is the day when Tencent has announced they will be cutting server access of the game in the country, meaning it won't be accessible to anyone in this particular region of India.

The post adds, "Tencent Games will terminate all service and access for users in India to PUBG MOBILE Nordic Map: Livik and PUBG MOBILE Lite (together, “PUBG Mobile”) on October 30, 2020."

It also states that from here on Bluehole(Parent company) will have the rights for PUBG Mobile in India. "The rights to publish PUBG MOBILE in India will be returned to the owner of the PUBG intellectual property."

Its been a while since the ban was imposed. However, the game had engraved itself within the Indian audience. Not everyone was able to eradicate it completely and a few were enjoying the game in the region despite the ban. Nevertheless, things will be different from tomorrow i.e Oct. 30 onwards and users of the game won't be able to do so. 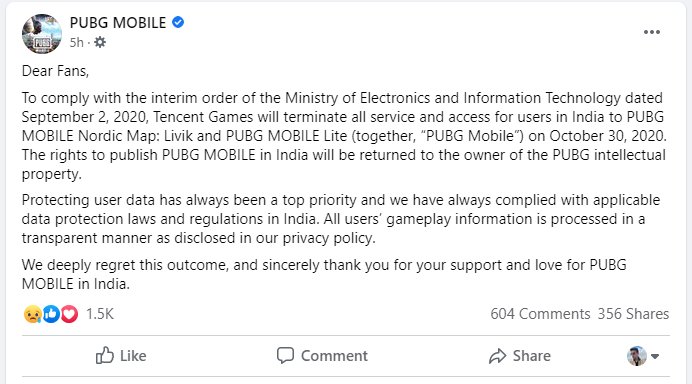