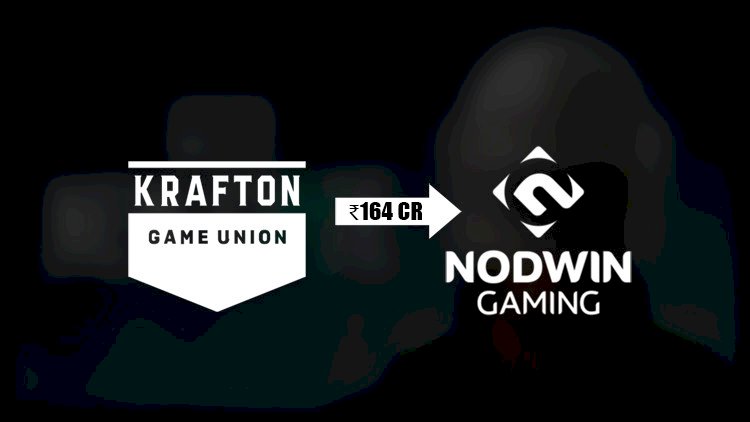 Built on the world's largest youth demographic and fuelled by affordable smartphone and data prices, esports has seen a surging demand which has led to NODWIN Gaming receiving a minority investment from South Korean Gaming firm KRAFTON.

Sharing the vision of their investors, NODWIN Gaming intends to channelize these funds to accelerate the development of esports in South Asia, Middle East and Africa, support talent, provide better gaming infrastructure and technology and conceptualise, organize and execute a multitude of tournament IPs at the national and international level.

“Esports will be a key pillar to the growth of sports entertainment in the future. It sits at a wonderful intersection of Sports, Entertainment and Technology where nations such as India can pave the path. With KRAFTON coming on board, we have an endorsement from the mecca of Gaming and esports - South Korea, on what we are building from India for the world based on our competence in mobile first markets. Gautam and I, the Co-Founders of NODWIN Gaming,  continue our journey with all of our existing investors reinforcing their faith in us” said Akshat Rathee, Co-Founder and Managing Director, NODWIN Gaming.

KRAFTON is one of the top gaming companies in South Korea and is the creators of intellectual properties and games such as PLAYERUNKNOWN’S BATTLEGROUNDS(PUBG)s, TERA, Golf King, Castle Burn among others.

Changhan Kim, CEO of KRAFTON said “KRAFTON is excited to partner with NODWIN Gaming to help foster the promising esports ecosystem and engage with our fans and players in India.” He added “Taking the momentum from this partnership, we will explore additional investment opportunities in the region to uphold our commitment and dedication in cultivating the local video game, esports, entertainment, and tech industries.”

Manish Agarwal CEO Nazara technologies said “We at Nazara congratulate the NODWIN Gaming team on the KRAFTON investment and it is a strong testimony of their leadership position in esports in India. Nazara has been an early and strong believer in the potential of esports to disrupt the sports entertainment market and we believe this partnership between KRAFTON and the Nazara group will accelerate the growth of esports and open doors for collaboration between Indian and Korean gaming companies in future.”

Rajan Navani, VC and MD, JetSynthesys, the founder investor who helped envision NODWIN Gaming at the conception stage itself said “We identified the early opportunity in esports as a key pillar to build the gaming ecosystem in India and this investment is an endorsement of the tremendous potential of esports in the journey of a new Atmanirbhar Bharat. Akshat, Gautam and other members of the founding team are true gems of a youthful India that is raring to conquer the world and we at JetSynthesys are excited about what the future holds for us.”

Last year, PUBG Mobile got banned in India over security and data privacy concerns. Since then a lot has happened, the original creator of the game slashed ties with the Chinese company Tencent and formed a new entity in the name of KRAFTON. In order to comeback, a country-specific version was also announced at the time of Diwali with 100 million investment for the Indian region. Although it's been a few months and there has been no word beyond that. Recently, PUBG: New State, a new game is announced from KRAFTON's PUBG Studio, but again the game is not available to pre-register for the Indian audience.

Now, the Indian firm NODWIN Gaming securing such a heavy investment from the PUBG creator, once again it definitely gives hope to all the fans from India that either version of the game might finally make a return.

Cyberpunk 2077 Will Have A Shorter Story Line Than The...