Bracken urges other companies and individuals to come forward as well.

India is reporting a surge in terms of COVID-19 cases and continues to battle against the virus declaring a nationwide emergency. The country has taken a severe hit and people are struggling to find beds and oxygen cylinders for the affected ones. A lot of Industry identities have come forward doing generous gestures to be a helping hand in such unfortunate times. 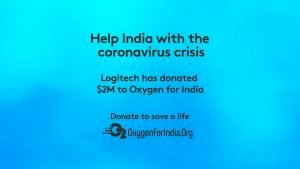 Logitech International S.A. is a Swiss-American maker of computer peripherals and software. Logitech CEO, Bracken Darrell has taken a moment to announce on his LinkedIn post that "We, Logitech, are making our largest one time donation in history, $2 Million, to support oxygen through Oxygen for India."

Bracken Darrell on the $2 million donation:

"The spike in coronavirus cases in India is the worst in the world right now. Currently, the country is battling almost half a million active cases with the states of Delhi, Maharashtra, and Uttar Pradesh, among others, the hardest hit. With thousands of new cases and deaths every day across the country, the health care system in much of the country is overwhelmed. Keeping people alive and others from getting much worse requires oxygen. We, Logitech, are making our largest one time donation in history, $2 Million, to support oxygen through Oxygen for India. Oxygen for India is working with the Center for Disease Dynamics, Economics & Policy (CDDEP), United Airlines, Tech Mahindra, and others to provide oxygen cylinders and oxygen concentrators to help those in need. I hope other companies and individuals will donate as well.

"If you'd like to also make donations to Oxygen for India you can do so in US dollars here and in other currencies here."

Epic Games and Verizon team up to bring The Super Bowl...

HP Report: Women consider Gaming to be a viable career...