12 Invited teams will battle for a prize pool of INR 1.2 Lakh from 9th August to 18th August. 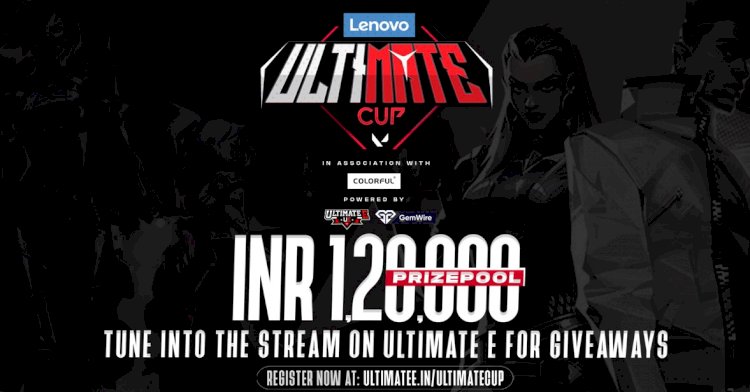 VALORANT is a free-to-play tactical FPS (First Person Shooter) game, published by Riot Games. The game launched in June 2020 with 34 million hours viewed by spectators in a single day, including a peak of 1.7 million concurrent viewers, according to Riot Games. Ultimate E and GemWire are proud to announce their Ultimate Cup featuring the best gaming talent across India. The event features a 1,20,000 INR prize pool.

Lenovo Presents Ultimate Cup, a Valorant tournament that will have the top professional teams battle it out to assert their superiority and win the Prize Pool of 1.2 Lakhs INR. The tournament will consist of 12 invited teams and 4 qualifier slots will be up for grabs to the underdog teams. Qualifiers begin on August 1st; with the top 4 qualifiers facing off against the top Valorant teams from India such as Velocity Gaming, Samurai Esports, T69, GodL, and Force one.

Team registrations link: https://ultimatee.in/ultimatecup
The tournament will take place between 9th August and 18th August from 5 pm to 10 pm (IST). It will be live-streamed on the GemWire YouTube channel. There will also be a few watch parties from your favourite content creators, and so do look out!

Lenovo is the Title Sponsor for the event. We are excited to announce their involvement to develop the gaming community and interact with the gamers of India. Lenovo has launched their BACK TO COLLEGE OFFER that gives a chance for all students to get their Lenovo products at attractive benefits worth up to 11,089 @just 2099* that covers 1-year additional warranty, 3-years premium care, and a Lenovo headset. In addition to this, customers can avail cashback offers with major finance partners: HDFC, Yes Bank, Bajaj Finance, Amazon Pay. Lenovo has incorporated some eye-catching offers exclusively for the viewers of the Ultimate Cup and special giveaways such as Legion Mouse, Headset, Gift vouchers, Merchandise, and other goodies will be given away during the stream to lucky viewers of the Ultimate Cup.