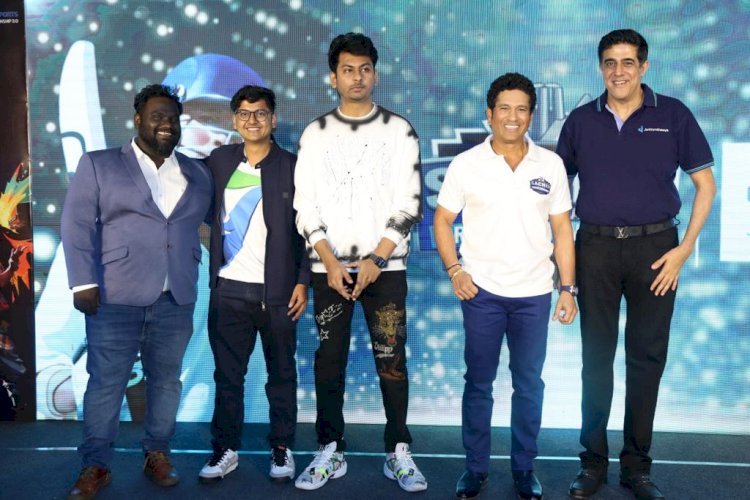 A completely online edition, the tournament was live streamed on Skyesports’ YouTube and Facebook handles and amassed a total viewership of 60 million+, peaking at 2.2 lakh concurrent viewers during the BGMI finals. The tournament concluded with an award ceremony hosted at Taj Land’s End, Mumbai, yesterday with Sachin Tendulkar, the Little Master as the guest of honour and Dynamo Gaming, Mortal , Scout, Jonathan, Payal and many popular gaming influencers stood alongside Sachin Tendulkar at the event.

Recently acquired by JetSynthesys, the new age digital entertainment and technology company with a strong play in gaming and esports, Skyesports is one of India’s largest esports organizations with a grassroots play. The new entity, Jet Skyesports Gaming Pvt. Ltd., was created with a vision to build esports at the grassroot level ahead of the Asian Games 2022. Working towards this vision, the event was also broadcasted in eight Indian languages being Hindi, Tamil, Telugu, Kannada, Malayalam, Bengali, and Punjabi apart from English to make the sport further accessible and inclusive across the length and breadth of the country.

Speaking on the success of the tournament, Rajan Navani, Vice Chairman and Managing Director, JetSynthesys said, “We recently welcomed Shiva and his team as part of the JetSynthesys family, and together, we are working towards growing the esports ecosystem in India. The Skyesports Championship 3.0 has been a trend setter that is recognized at an industry level, and this year it only became bigger, facilitated competitive play, and further expanded the esports community. We were also thrilled to see the response received by gamers for our game Sachin Saga, a first-time entrant into the tournament, taking cricket skill-based gaming to the next level.”

“It’s been an exciting month of the Skyesports Championship 3.0 witnessing wide frenzy from gamers as they competed for the top 6 esports games across South Asia. Infact, we have seen massive traction across Tier II cities in India, apart from Tier I cities as well. We are delighted with the success of the event and the participation that we have seen. It is breaking all records and setting a benchmark for many more esports IPs to come in the future, making this a steppingstone towards building the esports category further in India,” said Shiva Nandy, the CEO and founder of Skyesports.

The Skyesports Championship 3.0 is presented by AMD Ryzen and has strong industry partnerships such as Logitech G as the gaming partner, WD Black as the storage partner, Croma as the gaming retail partner and the regional streams are exclusively supported by Facebook.

With a concerted focus across gaming and digital entertainment, JetSynthesys has, in a short span of time since its launch, seen exponential growth and been the usherer of many category firsts. Over the years, JetSynthesys has become a leading name in the gaming category, particularly known for developing mobile games with high fidelity and network play. It’s known for its global publishing partnerships with the likes of Warner Music Group, WWE, Square Enix and Hollywood film Passengers and Floyd Mayweather. Post the acquisition of Nautilus Mobile and therefore Real Cricket™, JetSynthesys leads the market in terms of skill based cricket gaming. In addition to developing cutting edge and popular games in-house, JetSynthesys is the co-founder of India’s most successful e-sports company, Nodwin Gaming. To build esports at the grassroot level, JetSynthesys recently acquired Chennai-based Skyesports to form Jet Skyesports Gaming Pvt. Ltd.

The brand is also known for its deep tech stacks in new technologies like AI, Blockchain, AR/VR/MR and quantum computing. In the social community arena, along with 100MB, JetSynthesys is also home to ThinkRight.me, India’s leading meditation and mindfulness app; AnyDay Money, a well-known fintech platform for advance salary formed in association with Adar Poonawalla; JobDost, a platform providing access to grey & blue-collar jobs in multiple cities across India; and SonicJobs, UK’s #1 hiring portal for blue-collared jobs.

With offices in Japan, UK, EU, US and India, JetSynthesys boasts of the best-in-class technical and creative talent, striving to create and connect digital ecosystems globally.

Tencent to stop minors from Gaming at night using Face...