Rahul “Eminence” Hinduja, widely abbreviated as EMI is an identity that has aged with esports era. We sat down and dove with him in this long journey of him as a gamer to COO of Global Esports. 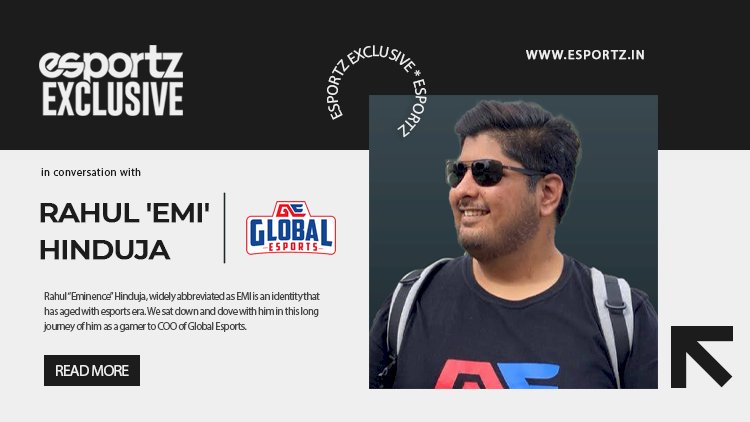 Tell us about your early life?

EMI: Having completed my education studying commerce and being a straight-A student, there wasn’t much I had going on for me except a tight circle of friends and my love for video games. I’ve been an ardent console and PC gamer for the better part of my life, having experimented with every genre possible. In 2002 when Level Up Studios (the publisher for the popular Online MMORPG Ragnarok Online) showed up in school one day to showcase their game and started handing out pamphlets featuring details of the game - I was blown away. The thought of being in the same game on the internet with millions of people was unheard of at the time and I was intrigued to find out how it worked and playing this game and eventually going on to tweak it endlessly led to me pursuing a Game Design degree all the while spending endless hours in the local cafe playing it with my friends and thus discovering the amazing world of esports.

How and where ’Gaming’ started for you?

EMI: As a kid, I was always fascinated by video games. My first interaction with games began as a stroke of luck at the age of 8, when my dad brought home the first-ever console I owned - a Sega Saturn. I and my brother spent all of our free time playing Sonic Adventures and Bomberman which were my favourite games at the time and eventually all of our pocket money was spent buying cartridges (games) for these consoles - and there on out - the only presents we hoped we would receive as kids for our birthdays were the new and upcoming consoles and this soon spilled on to PC gaming when I was introduced to Ragnarok and eventually Dota or 3 corridors as it was referred to at the time and the rest was history.

The story behind your gaming name?

EMI: Eminence as a name originated from Ragnarok Online where I really enjoyed playing the Priest role and one of the NPC’s had the name His Eminence Archbishop. This is where I drew inspiration.

You were into client servicing for some time, tell us your journey from Client Servicing to Esports? How did you convince family about pursuing a career in Esports?

EMI: Gaming and much later -  Esports, was an eventuality. I landed up in the world of advertising after college because of my best friend. When he told me about his day at this awesome new job, I had the inkling to try it out as well. I spent a couple of years at Wunderman Chennai working with clients like Ford but I knew this was only a transition into something much bigger.

I didn’t have much of a hard time convincing my parents in fact - they always supported my decisions for the most part because they always believed that passion drives us all and having grown up around the gaming ecosystem - that was one thing I didn’t lack, I knew it was an eventuality.

You have a stint of working with many notable organizations with hosting countless gaming events across the country. You also competed at the WGT 2011 Dota Grand Finals to the Overwatch World Cup for Team India recently in 2019. Looking back, you have engraved the name “Emi” as a remarkable one, how does it feel now after a decade long run?

EMI: It’s been surreal, to say the least, but I believe my journey in this amazing world of esports has only just begun and like every other journey out there - it’s the people you walk the journey with that counts the most so I’m eternally grateful having found that at every step of the way - be it with my cafe teammates from the Dota days, or my Ragnarok Online and Archeage Online Communities and most recently my family at Global Esports - there’s nobody else I would go down the rest of this insane journey with and it’s thanks to these guys that I wake up every day feeling like we just got started.

We just heard from you about your success, but what about the failures? Has there been a moment where you thought of quitting gaming? What made you continue?

EMI: Of course there were failures. I failed when I was unable to stay committed to Dota and esports as a whole back in 2011 due to the lack of support at the time, I failed miserably when I played Archeage a year and a half streaming daily and getting partnered on Twitch and watching the game die out and the complete lack of motivation I felt towards streaming after. The most successful people in the world have endured the biggest failures and by that notion - I haven’t even begun to fail yet :)

We love watching your “Esports This Week” roundup recap of everything happened in that particular week. How do you manage to put out one on every Friday without missing the deadline despite working on multiple verticals?

EMI: Thank you for the kind words. At the start, I really struggled in front of the camera and it was because of Rushi, Mohit and a few other folks in our team that I was finally able to overcome this fear. Turns out I was afraid of the camera that much mostly because my focus towards the show was getting it right rather than getting it done and once I realised that getting it done was just as important if not more, it became easier. As for getting the video out - Teamwork makes the dream work and all credit here goes to my team. The episodes would not be possible without them.

What’s the future gameplan of Global Esports? Following the PUBG Mobile ban. What was your reaction when you heard about the ban?

EMI: The aim is to give the community exactly what they have wanted for the last 2 years, an opportunity. And that’s pretty much we’ve been working on for the last two years. Our focus as always regardless of the platform and genre of game - is to nurture the best esports athletes & content creators and with that, we also strive to be a content powerhouse in the space. Our focus is on introducing the world of Esports & Gaming to the next billion users starting at the grass-root level beginning with India and then expanding to the rest of Asia and the only way to do this is nourishment at the school and collegiate levels where budding talent can be given a platform to grow and all of this, with a content-driven approach.

The PUBG ban definitely shook the Indian Esports Ecosystem at its core. The number of opportunities that the game created in India is something no other title will be able to replicate for a very very long time simply because of the community that is cultivated. Regardless of the game staying banned or not, the community’s tasted blood now, and if PUBG isn’t coming back - they’ll happily look at the alternatives and right now - the possibilities are endless. Valorant, CODM, Free Fire and even a few unlikely contenders like Fall Guys and Among Us are doing exceptionally well. When I heard about the ban, I wasn’t surprised. With a massive conglomerate like ByteDance facing the same fate a few months ago, it wasn’t long before the Indian Government had their sights set on Tencent. I really hope the game can get unbanned though - because as I said, no other game will completely fill the void PUBG Mobile left behind.

Lastly, what is the EMI advice to the people who want to get into esports?

EMI: Honestly, there are several ways to get your foot in the door. There are more jobs now in esports - than ever before which means it’s way easier to get involved and get paid for. The bad news is - it requires a ton of hard work and dedication, and it can get really competitive so only do it if you’re sure it’s what you want to do - and you’re passionate about it. Find your niche and work towards specialising in it - if your goal is to become a caster - put all your efforts there. If you find tournament organising fascinating - put all your focus towards logistics & production. If you’ve got great communication, writing and social media skills - hone them towards journalism or Press and marketing. Being an all-rounder is good too, but in my honest opinion - hyperfocus towards one area of expertise will always go the distance.