In Conversation with Nicolas Estrup, Director of Product & Experience at BLAST

We exchanged a few words with one of the most accomplished CS:GO tournament organisers and gained insights on challenges BLAST faced in the pandemic times. 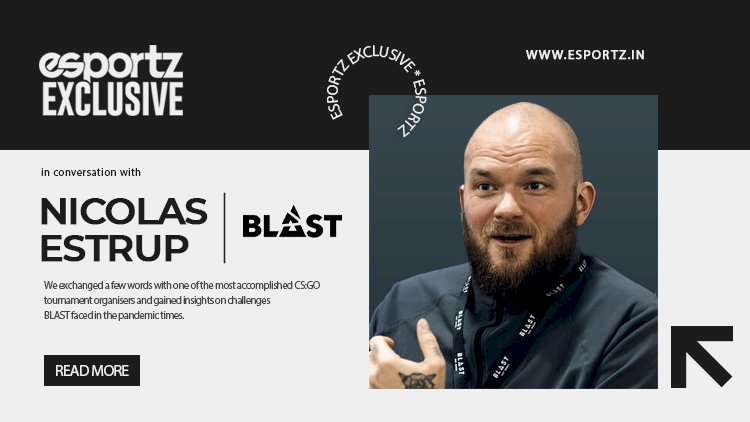 The world transitioned online and things are happening that way for a while, I’d like to start with a simple question. What does BLAST prefer, Traditional LAN or Online venue?

It would have to be LAN events, we really miss arena events and being able to take our shows all over the world. Nothing can replace the feeling of entertaining and interacting with a live audience but we’ve had to adapt this year and we’ve tried to bring that intimate arena feel to our broadcasts despite the online-only remote format. We’ve really enjoyed the challenge of pivoting, and feel our future LAN events will only benefit from the flexibility and technology innovation we’ve added to our tournaments over the last few months.

COVID-19 or Not, BLAST has managed to pull off a successful show. What do you think is the secret of being able to reach out and keep such a hefty audience intact?

Simplicity is key, that was our approach in the beginning to figuring out how we could make an experience that felt and looked as close to a normal event as possible. The main goal being for the viewers sitting in their homes watching, for them to just for a moment forget that they’re in a lockdown and just be entertained by something that looks and feels as close to normal as possible. The way we achieved that was to start with easy wins, such as sending production kits to all talent, including lights, cameras, a backdrop etc. - that combined with making sure we had a camera on all players and got fans closer to the players through live content such as listening in no team communications and such, meant for a very intimate experience that almost looked and felt like a normal event.

Untimely arrival of the virus has certainly altered a lot of things. However, do you think it helped esports grow exponentially?

There is no doubt that esports has enjoyed more attention and increased viewership with everyone having to spend time at home this year while the industry has continued to provide live competitive action where traditional sport and entertainment couldn’t. But the lack of LAN tournaments has hit the industry hard, through the loss of ticket sales and other tournament revenue. When we return to LAN events, hopefully the industry can use this increased appetite for esports to continue to grow the ecosystem in years to come.

With events being completely online, recently at a CSGO event, a few teams were found exploiting a spectator bug and were announced as banned. What measures BLAST is implementing and has strengthened to maintain fair-play?

Since the Counter-Strike world has had to move online we have been working hard on ways for BLAST to be an active participant in upholding the competitive integrity of the scene. Our operations team has introduced the use of MOss, which is aimed at more effectively tackling potential stream snipping issues. It will allow us to tell if a coach has the stream open on their PC or maybe accessing information via HLTV. This system is used in combination with other features such as player cams, TeamSpeak and audio recordings to help provide as much evidence both in flagging concerns.

How do you see the CS:GO scene is impacting esports as a whole?

There’s no doubt that CS:GO is the grand-old-man of esports titles and it’s longevity, as I see it, comes from embodying what all great games, sports, challenges all have, which is the classic saying “Easy to learn, difficult to master”. That combined with a superior experience within the game itself, through its mechanics, I think will ensure that CS:GO will most likely never die. In tech we always talk about “The killer of…” type of products, and that also happens in esports and gaming. The amount of times a new game has been dubbed “The CS:GO killer”, Counter-Strike has always survived and continued its steady growth in viewership and playerbase. So when I think about what place CS:GO will have in the esports scene, I’d say that it is and most likely always will be part of the foundation of esports, that is now paving the way for new games and superstars in other games. It’s definitely not going anywhere!

According to Esports Charts, The BLAST Premier 2020 Fall Series groups reached a viewership of 512,971, making it the second-most peak viewed event ever in the CS:GO history. How does it feel on unlocking this achievement?

It’s great to know that people are tuning in for our events in the hundreds of thousands, what drives us to improve and innovative further at each event is the fans and their feedback - ensuring they’re always excited by our tournaments and are keen to come back every time is hugely important to us. Recent viewerships figures show that we’re creating a product and experience that fans enjoy, and long may that continue.

Moving apart from the primary game, BLAST also hosted a DotA 2 event earlier this year. Will BLAST be hosting more different titles rather than CS:GO?

At BLAST, we’re always on the lookout for other games to branch out into and see how we can innovate, be disruptful in a positive way and bring something new to the table. Dota 2 and VALORANT are our most recent ventures, we managed to couple our broadcasting techniques, fan-first innovations and technology we’ve applied during CO:GO tournaments with exciting in-game elements and storylines from these two games. With the Bounty Hunt Dota 2 tournament in June, we wanted to bring a new approach to the ecosystem and with the introduction of our dynamic prize pool, fan predictions, player cams and high quality of broadcast we think we offered something lovers of the game really enjoyed. I’m sure there’s more to come in 2021.

One for the BLAST fans from India. Blast Premier, the successor of Blast Pro Series. BLAST has had venues rotating across the world to its events before it transitioned online. How likely a city of India is to be a BLAST venue in the coming time?

Nothing gives us more pleasure than being able to take our events all around the world to adoring Counter-Strike fans. Over the last 24 months, some of the places we’ve hosted events at include London, Copenhagen, Austin, São Paulo, Moscow and Bahrain - and hope to be able to do this again once travel restrictions permit and it is safe to do so. We are well aware of the passionate and ever growing esports and CS:GO community in India. We regularly have people tuning in to watch our BLAST Premier events from India when the right opportunity arises it would be something we’d be keen to look into.

Cristiano Ronaldo will now be a Playable Character in Garena Free Fire called as...