The duo clinched spots in the Indian team after becoming joint winners at the National Championships, set to fight in the SRWC Continental Qualifiers 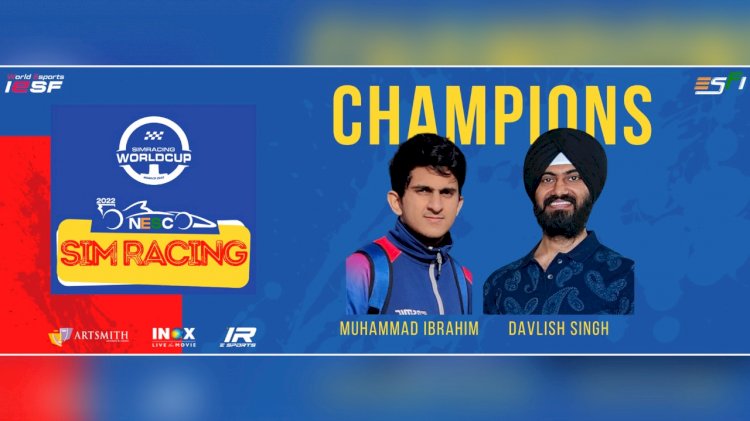 Producing brilliant performances, Muhammad Ibrahim and Davlish Singh secured themselves spots in the Indian team for the inaugural Sim Racing World Cup after clinching the Top position by securing same points (43) at the National Esports Championships (NESC), concluded at the INOX Multiplex in Mumbai in a hybrid mode.

The National Esports Championships, conducted by the Esports Federation of India (ESFI), witnessed participation of the country’s 250 top sim racing drivers including Sai Prithvi, Prathamesh Yedre, Hari Krupanand and Jamie Shaw. The tournament was conducted in a hybrid model—online as well as offline—with the offline playoffs taking place at Mumbai's INOX Megaplex and IISM Campus.

“We are delighted with how both the online and offline qualifiers were successfully conducted. All of the sim racing drivers displayed a healthy competitive spirit and maintained that till the finals to ensure that all of the races were well contested. I congratulate the winners, Muhammad Ibrahim and Davlish Singh on their remarkable achievement and back them to bring the trophy home. I would also like to thank INOX, IR Esports & IISM for their fantastic support and for making this event possible,” said Lokesh Suji, Director of Esports Federation of India and Vice President of the Asian Sports Federation.

The Grand Finals of NESC featured a total of two races with the winner being determined based on the total points accumulated from both races.

Ibrahim started on pole for the first race and maintained that position throughout the race, courtesy a brilliant drive. The second race started with a reversed order of the Top-8 finishers where Davlish finished on top followed by Ibrahim.

With both Ibrahim and Davlish tied on 43 points each in the summit clash, both emerged as joint winners of the national qualifiers.

“This is an excellent opportunity to represent your country on an international platform. Winning the qualifiers amongst 250 players overall gives me immense satisfaction and feels like a huge achievement but it also increases the pressure of performing well in the next stage for me. Undoubtedly, I will be practising a lot to achieve the best for my country with the upcoming Continental Qualifier also on my mind," said an elated Ibrahim, who has also won the McLaren Logitech G Challenge earlier this year.

Davlish, who has been playing sim racing since 2019, added: “I believe this was one of the largest sim racing events in India yet where ESFI gave participants from all over the country a chance to fight for a spot to represent their country on the international stage. The event was very well organised with some very quick, competitive and fair racing from all the top drivers. The double sprint race formats with reversed grids made the races even more exciting."

ESFI continued its partnership with the country’s top sports and Esports specialised communication firms, Artsmith - Concepts & Visions, which will continue its support as their communication partner for the prestigious Sim Racing World Cup. The number of slots (slots = number of sim racers qualified) per continent for the Grand Final in Monaco is as follows:

Wildcards for Monaco and Slovakia = 12 best sim racers in Monaco