Through the means of gaming, mental health will be addressed and funds will be raised for charity. 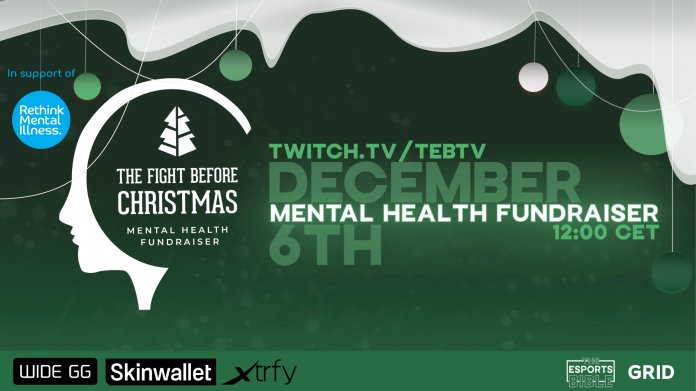 GRID, a data platform has inked a partnership with Rethink Mental Illness, the UK based charity to host a CS:GO event called 'The Fight Before Christmas'. The event is held to raise funds and awareness around mental health.

The event will commence on the 6th of December at 12:00 CET and will be live-streamed on Twitch. The games will be played in CS:GO’s Wingman game mode with mixed-gender rosters to promote gender equality.

WIDE.GG, the female esports community platform is the official diverse partner while TheEsportsBible is the Empowerment Content Partner for the event. Skinwallet and Xtrfy are also stepping alongside GRID as partners for the fundraiser for The Fight Before Christmas.

Harry Wiggett, GRID’s Key Account Manager, said: “Here at GRID we felt the need to celebrate the end of 2020 with some refreshing CSGO content for the community. It’s been a wildly unpredictable year that we at GRID are thankful to have survived, personally & professionally. Together with our partners we are now happy to raise funds and raise awareness on mental health.

“An area that needs no introduction but more attention. Nobody deserves to face internal battles without any support therefore we want to raise awareness to Rethink’s services and also raise funds for them to advance in their support of those in need. Thanks to everyone involved in this event, it’s a pleasure to be giving in the mental health space.”

A total of eight teams will participate in this event, including Swedish players Julia “Juliano” Kiran and Natus Vincere’s Ilya “m0nesey“ Osipov are already confirmed for the event.

Relog Media, will be taking care of production and broadcasting. The Fight Before Christmas' will have POV camera angles of the participants and the event looks to engage heavily with the audience and the community to raise donations.

A Rethink Mental Illness spokesperson added: “Rethink Mental Illness are very grateful to be the charity partner of ‘The Fight Before Christmas’, the growing relationship between charity and esports is incredibly exciting and one we hope to build on for the future. Any donations received will go towards our work supporting those severely affected by mental illness.”