We sat down and learned about Gautam Virk’s long esports adventure. From a casual gamer to COO & CO-founder and becoming one of the most renowned faces of Indian Esports to ever exist. Gautam talks about his life, career, and NODWIN Gaming. 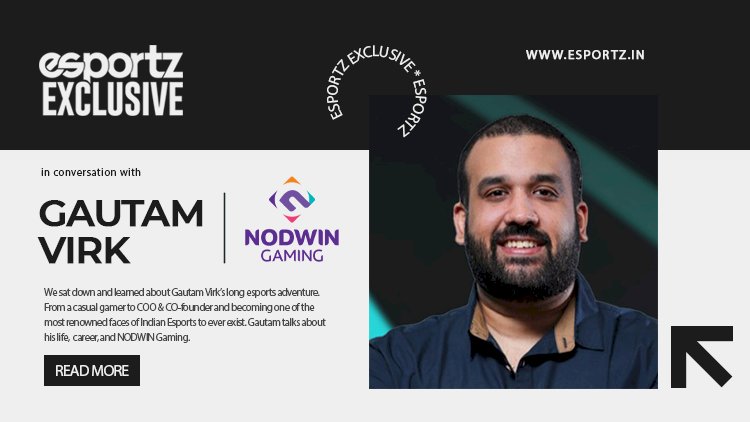 Gautam, we know you are a gamer at heart like most of us but what particular thought brought NODWIN Gaming to life?

Before making it an idea, it was an instant reaction of a group of gamer friends to an unfortunate incident that was the India Gaming Carnival. We took it upon ourselves to mend things and that was the inception of the idea of NODWIN Gaming. We were all aware of how the global market of esports was slowly turning hot and we envisioned a similar market to flourish in India.

Tell us the tale of your friendship with Akshat Rathee and how this friendship transformed into a business relationship?

Honestly speaking, it was never a business relationship. It was and always will be a relation between two great friends and their love for games.

Dew Arena 2016 was India’s largest gaming championship with a massive prize pool of Rs. 10 lakhs on the line. Just like many other events before, the name ‘Gautam Virk’ was once again at the helm for managing production. Tell us about the experience.

Dew Arena 2016 will always have a special place in my heart. It was the big daddy that time. The participation was great, the turnout was good, the hype was there, we just had to deliver our best. With the backing of a great team(a very small team at that time), we pulled it off in the best way possible. I remember, hydraulics were used for team entries onto the stage and it was fascinating. If you take a look at the older clips, it still looks magnificent with those green LEDs and massive screens. It was challenging and fun at the same time.

You have come a long way from co-casting the old WWZ 4 archives in 2012 with Akshat Rathee to a few years later taking interviews on Skype for Mid-March Madness DotA 2 Tournament.  However, this is in the past, but do you think doing these things every day then have shaped you into the man you are today?

Yes, undoubtedly. The initial phase is the toughest, but it’s also the phase where you learn the most. Exposure to as many new things as possible was my aim while we were starting out. Yes, I’ve hosted interviews, did a fair bit of casting, handled production and put myself all over the place. I feel all of that initial learning has shaped my vision for the future in a real tangible way.

NODWIN Gaming has already expanded internationally to UAE and South Africa. What's next on the list?

We are planning to cover the whole of South Asia. New offices incoming!

Esports grew exponentially in the pandemic with more and more people staying indoors. NODWIN Gaming successfully transitioned its events into online venues but which challenges were the hardest to address?

The biggest challenge was the logistics of the whole transition. How will we transport our machines to each and every team member’s house, unstable internet connections at homes, constant communication and arranging and re-arranging things over and over again. It took a toll on us but we found our way around it. An initial couple of weeks were distressing but once we found our flow, it was pretty much a walk in the park.

A sneak-peak at a surprise from NODWIN Gaming that’s underway for all the gamers?

Nothing solid as of now, but we do have some great news coming your way. Keep an eye out for the official announcements.

What are the three major changes that you expect to change which will push esports in India in 2021?

Esports is normalising as a vocation in India as every single day passes. What is Virkaholic’s advice to the ones who are seeking to get into esports?

For the one’s looking to be a part of it, guys and girls, it’s a huge space. It’ll be easier for you to get into esports if you have a clear idea of what you want to do with esports. The idea of just being a part of it will leave you stranded in the middle. Find your niche, build around it and work hard for it.
-

Gautam Virk and NODWIN Gaming have been a part of almost every major esports event the country has witnessed in the last decade. The venture has grown into an established firm, from expanding internationally and tapping alliances with global bodies such as ESL, Dreamhack, Valve Corporation to Nazara Technologies acquiring a 55% stake in the company. Most recently, NODWIN Gaming has also secured a 164CR investment from South Korean Gaming giant KRAFTON for the development of esports across South Asia, the Middle East and Africa.