Garena today announced that registrations for the Free Fire India Championship (FFIC) 2021 Fall, its flagship event in India, will open today to all players in India and Nepal. Teams can sign up between 16 to 23 August through the in-game Free Fire Cup (FFC) mode. The top FFC teams will be joined by seeded teams from the recent Free Fire Pro League (FFPL) 2021 Summer, as they compete for the lion’s share of the INR 75 lakh prize pool.

The top performing teams at the FFIC 2021 Fall will also stand a chance to represent the region at Free Fire’s upcoming international tournament, as well as to directly qualify for the next Free Fire Pro League 2021 Winter.

The road to be crowned the FFIC 2021 Fall Champions will not be easy; teams will have to navigate through a total of five challenging stages in order to clinch the tournament’s ultimate prize. All of the matches will be played in the Battle Royale Squad mode.

The tournament will begin with two qualifier stages where teams battle it out to earn a spot in the FFIC 2021 Fall League Stage. Participants will first compete in the Open Qualifiers via the Free Fire Cup (FFC) mode, which will see the top 42 teams advancing to the Closed Qualifiers. These 42 teams will be joined by 6 teams ranked #7 to #12 in the recent Free Fire Pro League (FFPL) 2021 Summer tournament. Taking place on 1 and 2 September, the Closed Qualifiers will further whittle the teams down to the top 12 – these 12 teams, together with the top 6 seeded teams from FFPL 2021 Summer will embark on the FFIC 2021 Fall League Stage.

The FFIC 2021 Fall will continue with teams competing across a further three stages – the League Stage, Play-ins, and Grand Finals.

The League Stage will see the top 18 teams divided into 3 groups of 6 teams. Each group will play against each other round robin style over the course of 9 league days, spanning a period of 3 weeks. This will be taking place from 17 September to 3 October.

The top 2 teams from each of the 3 groups will qualify directly for the Grand Finals. Thereafter, the remaining 12 teams will take part in the Play-Ins on 10 October, where they will battle it out for a remaining 6 Grand Final spots.

The FFIC 2021 Fall Grand Finals will see these 12 teams battle for a share of the INR 75 lakh prize pool on 17 October. However, the prize money will not be the only reward at stake. The top performing teams at the FFIC 2021 Fall will get the coveted opportunity to represent the region at Free Fire’s upcoming international tournament. The top 12 from FFIC 2021 Fall will also qualify directly for the next Free Fire Pro League 2021 Winter. 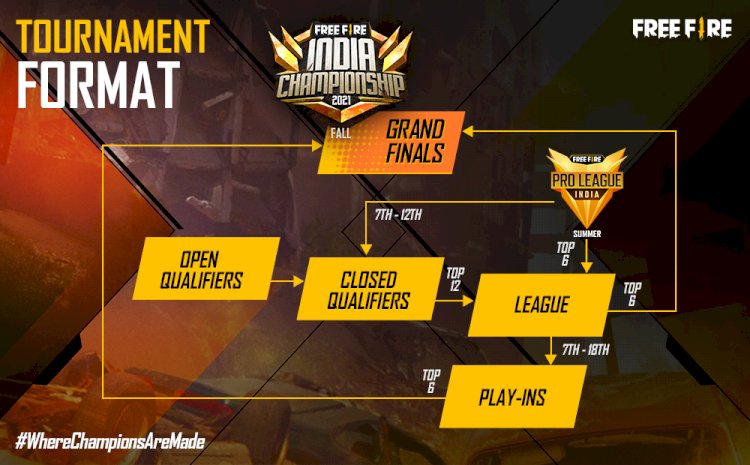 The FFIC 2021 Fall will be broadcast live from the League Stage onwards. Fans can tune in to the Free Fire Esports India YouTube Channel, as well as on Facebook and BOOYAH! to catch all of the high-octane action!