Catch the top 18 teams from India, Pakistan, and Bangladesh fight for glory, national pride, and the lion’s share of the USD 50,000 prize pool when the 7-day tournament commences on 9 April.

Garena has announced the Free Fire Tri-Series, the mobile battle royale game’s largest esports tournament in South Asia. The high-octane tournament will bring together the top 18 Free Fire teams from India, Pakistan, and Bangladesh, with each nation represented by the top 6 teams in its respective domestic league – the Free Fire India Championship 2021 Spring, Free Fire Bangladesh Championship, and Free Fire Pakistan League. Kicking off on 9 April, the Free Fire Tri-Series have the 18 teams compete in a thrilling 6-day battle to determine who proceeds to the Grand Finals on 25 April and claim the lion's share of the USD 50,000 prize pool.

The Free Fire community has continued to expand in South Asia and across the world, with the mobile battle royale game the most downloaded mobile game globally in 2020 and 2019. Through the Free Fire Tri-Series, Garena aims to continue its efforts towards delighting its fast-growing South Asian community with exciting Free Fire esports content, and to support and develop the incredible talent in the region. The Free Fire Tri-Series will also help strengthen the connection fans have for their teams, as they watch them battle for glory and national pride.

The Free Fire Tri-Series promises to provide an action-packed April for teams and fans. The tournament will feature a total of 18 teams competing in the Battle Royale Squad mode. Each team will be split into 3 groups and will face off against each other twice across 6 match days. At the end of Day 6, all the scores will be pooled, and the top 12 teams will proceed to the Grand Finals on 25 April. The ultimate winner of this tournament will receive the lion’s share of the USD 50,000 prize pool.

The schedule for the Free Fire Tri-Series is as follows:

The Free Fire Tri-Series will feature the best teams from the India, Pakistan, and Bangladesh domestic leagues. 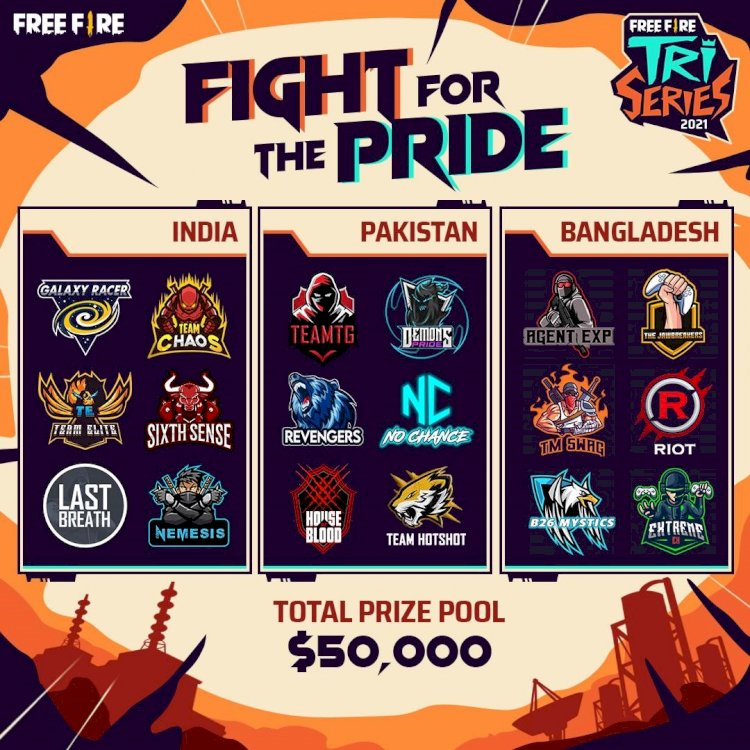 The Free Fire Tri-Series will prove an excellent testing ground for the top teams in each of these regions, before selected teams depart to Singapore for the Free Fire World Series 2021, which will be held from 22 May to 29 May. These titans will get a unique opportunity to represent their nation at this pinnacle event for Free Fire Esports globally.

DotA 2 organisation Team Nigma is relocating to Abu Dhabi to be a part of AD Gaming...