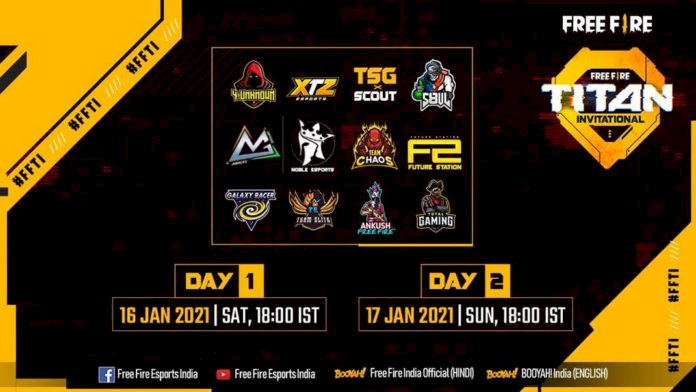 Garena is all set to kick off its first Free Fire tournament of 2021 dubbed as the "Free Fire Titan Invitational". The event runs for a span of two days from 16th to 17th of January and to will be held completely online. A total of direct-invited top 12 teams will brawl for a prize pool of INR 25,000,000.

Former PUBG Mobile players and popular Gaming YouTubers of the country, Scout and Mortal are also confirmed for this event. Scout will be leading the charge at TSG while MortaL to play from S8UL Esports. Apart from this, the top talents of Free Fire like VasiyoCRJ, Pahadi, and FozyAjay are also playing. With no doubts, this tournament is going to witness some sheer top tier action.

The first mode, Clash Squad Mode will be played on the first day of the event and the day to have INR 5,00,000 for the grabs, with the winner taking home INR 3,00,000.
A single-elimination format will be followed until the final two teams are left who battle in best-of-five matches. A match will have 7 rounds each.

The second day, invited teams will play in Squad Battle Royale Mode and a whopping INR 20,00,000 is kept aside only for the Day 2, winner clinches lion's share of INR 10,00,000 in favour. Bermuda, Purgatory, and Kalahari are the maps for Day 2.

All of the action will be livestreamed on official YouTube channel and Facebook page of Free Fire Esports India, as well as on Garena's own streaming platform BOOYAH!.