A total of 50 rounds were played. 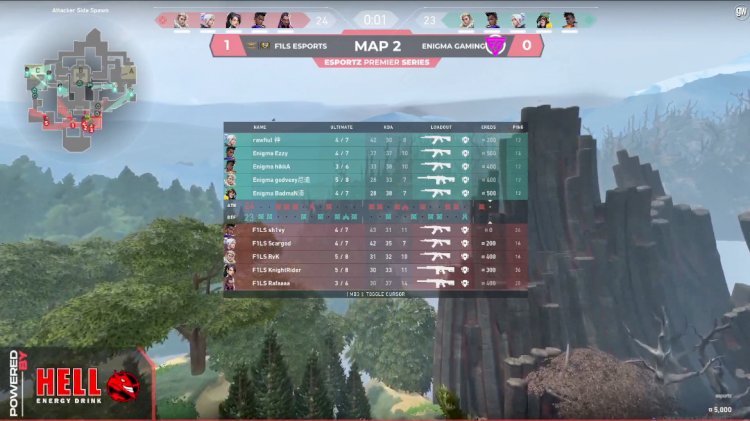 On the 30th of July, ForceOne x LegStump (F1LS) and Engima Gaming (EG) competed in the consolation match of Qualifier 4 of the Esportz Premier Series Valorant. The best-of-three was contested on maps of Bind, Haven, and Breeze.

F1LS made a strong start to the series by comfortably winning their map pick of Bind with 13-6.

Heading into Haven, the map turned out to be one of the longest map ever seen in the Indian Valorant competitive space. Both teams were neck-and-neck from the start, eventually fighting it out in overtime. The score remained tied at 24-24, ultimately crashing the room due to the regulation that custom games are limited to 90 minutes. The lobby was rebuilt, and EG finally defeated F1LS with a score of 26-24, equalling the series to 1-1 and necessitating a Map 3 finale.

In Map 3 Breeze, EG carried the momentum swing from Map 2 and held the upper hand from the start. They defeated F1LS to complete the comeback and seal the 2-1 series victory.

Enigma Gaming has secured the consolation prize of INR 20,000 with this win. The Grand Finals of Qualifier #4 is between Velocity Gaming and True Rippers Esports, who will compete for the greatest share of the INR 1,00,000 prize pool and a spot at the INR 10,00,000 MEGA Lan Finale in December.

The Grand Finale schedule will be revealed shortly on the social handles (Instagram, Facebook, and Discord) of esportz.in