An exciting yearlong open for all tournament format announced, engaging gamers from all genres. Completing the esports cycle from Online qualifiers to LAN Finale. 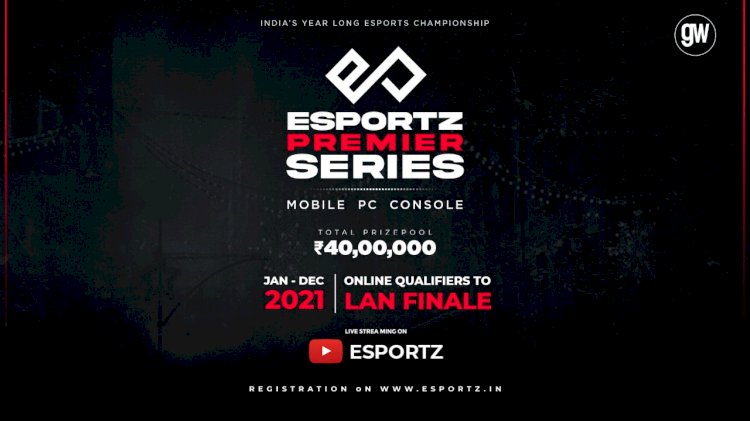 Esportz.in, a fan engagement and a gaming experience platform earlier announced Esportz Invitational Series, a Free Fire tournament towards the end of last year that boasted a prize pool of INR 1,50,000. The weeklong tournament had India’s top twelve teams battle it out for the championship and established Esportz a solid base of +11,000 subscribers on YouTube while cumulating a viewership of 250,000+.

After a successful edition, Esportz is returning with an even greater tournament for the lovely gaming community as the ‘Esportz Premier Series’. The tournament is designed to run throughout the year and wears an open format, meaning it yields a participation chance for all kinds of gamers - be it Console, PC or Mobile.

Esportz Premier Series will host a title for each segment of PC, Mobile and Console. A massive cumulative prize pool of INR 40,00,000 has been announced for this yearlong championship. Multiple tournaments will be hosted dedicated to this event and it begins with what they overran into esports, Free Fire is the first event starting this month on 23rd of January.

The grand series will be concluded in an even grander way, bringing back the old school ‘LAN FEST’. The Grand Finals for each game will be held here offline in a battle arena with live gaming, music from popular artists to amp the ambience and to tip it all off, also witness your favourite gaming characters coming to life at the ‘Cosplay Championship’. LAN FEST will offer attendees a truly immersive experience throughout the span of two days in the month of December.

Registrations for Esportz Premier Series have begun at Esportz.in

For more details regarding the format and scheduling, do visit the official website.

About Esportz.in - A fan engagement and a gaming experience platform dedicated to esports and the gaming community. esportz.in provides latest gaming news to hard-core gamers as well as casual gamers. It’s a one-stop hub for all gaming needs where gamers can get latest updates about gaming and also participate in competitive community tournaments.

Ruined King: A League of Legends Story, the RPG game is...