XTZ Esports still top the table but other teams are closing by. 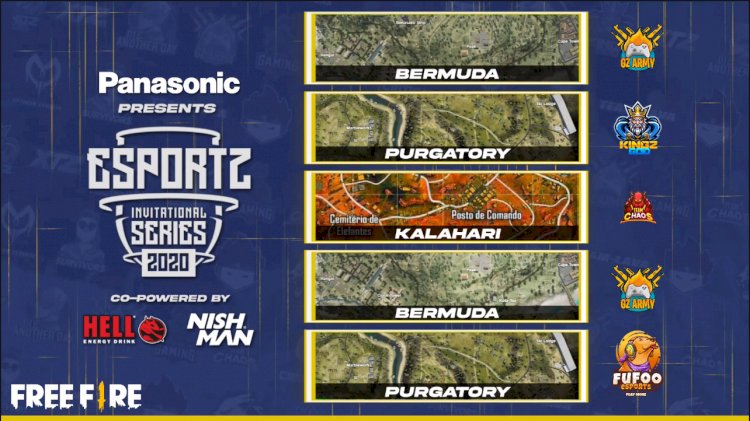 A final of 10 games left, of which the 5 were played today on the following maps just like yesterday - 1) Bermuda, 2) Purgatory, 3) Kalahari, 4) Bermuda, 5) Purgatory.

Heading into the first map of Day 6, GZ clinches victory in Bermuda with 10 kills and a total of 40 points. The end moments of the game saw an amazing grenade by GZ's Promit that sent home the whole squad of KingGod packing at third place who were closing in the circle. Die Another Day finished second with a total of 24 points and 4 kills while KingGoz bagged in 25 points with 5 kills.

The second map of the day was Purgatory, KingzGod Booyah! it. They had to face off the team that highlighted yesterday, Fufoo Esports. However, KingzGod had a good place within the circle while Fufoo had the man advantage on the other end. As the zone started, Fufoo started closing in and that's where they got caught in the act at the hands of KingsGod Shubhu who clutched the kills for his team.
KingzGod adds a score of 36 with 8 kills while Fufoo Esports get placed second with 35 points and 9 kills. Die Another Day comes third with 21 points and 3 kills.

Kalahari was very Chaotic in the final moments, and the team name that goes aligned with the situation itself won the third map of Day 6 which is none other than Team Chaos itself that edged off the fan favourite team TSG Army. Team Chaos secures 36 points with 8 kills while TSG Army gets placed second with another 35 points and 9 kills. The third position was once again secured by the point table toppers, XTZ Esports extend their lead by 23 points and 4 kills.

Bermuda was played for the second time in the day as the fourth map. The same team that reigned in the first Bermuda map of the day, wins second Bermuda map as well. Its none other than GZ Army itself adding 36 points with 8 kills. GZ Abhay shined for his team with 6 individual kills in this map of the 8 teamkills. Survivors come second with only 2 kills and a score of 23 while Die Another Day gets third placing with 29 points and 7 kills respectively.

The final affair of the day was Purgatory once again. The team that highlighted Day 5 of EIS won the final map of Day 6 as well. Fufoo Esports Booyah Purgatory, thanks to smart play by FuffxAayush. It was all about survival, Total Gaming and Fufoo Esports were left in the end and as the final circle favoured none of them all of the players were rushing in, however, Aayush is the only player who was able to reach in in-time - automatically clinching the final Booyah of the day. Fufoo Esports secure 26 points with 3 kill while the Total Gaming adds a hefty of 37 points despite the second placing in this map, thanks to 10 teamkills. Team Chaos finishes third with 29 points and 7 kills.

Overall points table at the end of Day 6: 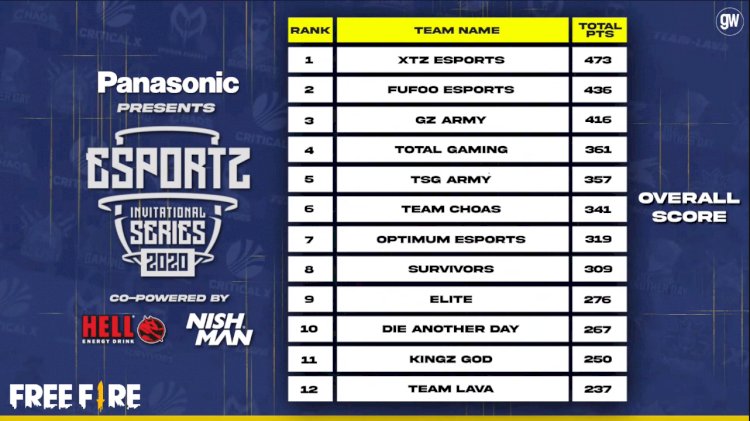 This marks the end of the Day 6, with only final 5 maps left for twelve teams to turn the tides in their favour as the winners of Esportz Invitational Series 2020 will be crowned in the coming day. Grand Finale beings 6 PM IST today, 6th of December.