“Why only Mumbai? India is our playground, and eventually, we will go global” - Vishal Parekh, Chief Marketing Officer, NODWIN Gaming.

Vishal Parekh is the newest marketing expert under NODWIN Gaming's wing. While the BGMI Masters Series is set to commence on live television, we were able to speak with Vishal. He shares details on all that went into making this event a reality. 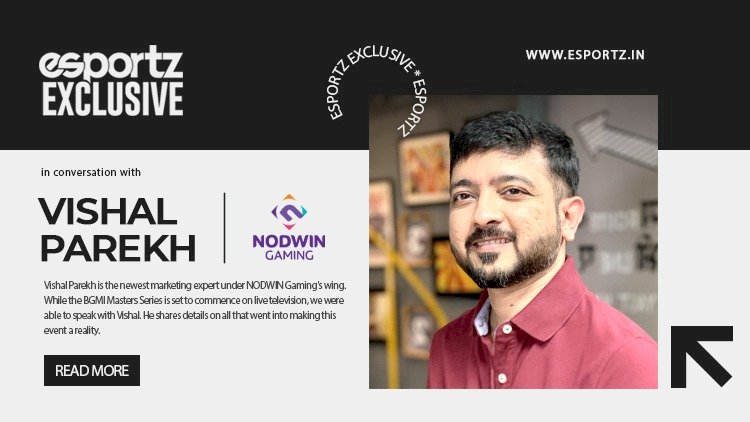 Thanks to the collaboration between NODWIN Gaming and Star Sports, esports is poised to unlock newer heights with the BGMI Masters Series ready to air on television. India's top BGMI esports teams will be seen competing in a LAN event held in Delhi NCR, where a prize pool of INR 1.5 CR (about $19554.98) is on the line. We were able to exchange a conversation with Vishal Parekh, one of the key figures from NODWIN Gaming, who provided us with insights on the occasion. The Interview can be found embedded below.

Q) I'd like to start by Congratulating on the recent collaboration with Star Sports which has enabled a BGMI Esports Tournament called the BGMI Masters Series to air on Television starting on the 24th of June. Please take us back in time to tell us how the idea came through and how did it has aged to this day?

A) The idea was always there since we viewed esports as a sport. More viewers need to see the sport and understand why it is called a sport. We tried a few things in the previous few years, such as streaming on various platforms, and yes, we saw that people understood that there are gamers who are shining and making their mark, and it all signalled to us that it is now probably the right time to go on TV.

Q) Where do both the brands see value in each other in this association?

A) If you've seen the promo, it talks about esports being called an epic sport. The BGMI Masters Series is set to air on Star Sports Network, which is the home of all sports. It adds value not just in terms of brand association, but also in terms of reaching out to a larger audience that is eager to learn about this terminology. In 2016-2017, brands were talking about esports, but in the last two years, a lot more people outside of PC or mobile gaming have heard this phrase.

Both of us are taking a leap. We understand that all big sports happen on Star Sports Network and who better than NODWIN can organise this and create a production which is TV worthy. That's how it is, two big people joining hands to make something bigger.

Q) The brainstorming that went into making the BGMI Masters Series a reality.

A) Everything has happened before, and what we are doing now is delivering it to people through television as a medium. While Star Sports is on, viewers can still watch it live via digital platforms through Loco and glance. The lockscreen experts, Glance is presumably attempting to figure out how this may be implemented on a lockscreen. We're only a few days away, but everyone is on edge wondering what will happen when this goes live on TV, but when it happens, you'll undoubtedly have goosebumps. You'll see your favourite players on-screen, and then you'll walk out and tell your family, "This is the game I play, and this is the guy who is our generation's star." It's a lot more beyond just a game now.

Q) How do you seek to capture the right audience on mainstream television?

A) It is the broader audience we are talking about. While the cultural way of watching esports events is still available, begin consuming this as a true sport with a community, friends, and family, make some noise and understand each other.

For example, the sort of comments and debates you'd have in the Indian Premier League or World Cup finals such as, "this no-ball may be difficult." This is what sticks with you and inspires memes. With Esports, we want to achieve this. There are some terms that people might not understand now but they will after they start watching Star Sports every day for three hours during prime time. They'll figure out what the game is all about sooner or later. In esports, there is no man of the match as in cricket, but there is an MVP. This is what this journey is all about: to understand.

Q) Many countries throughout the world have recognised esports as a sport; do you think India will follow suit one day?

A) We don't know, and we're not here to say if it's right or wrong. We want to show it as a sport and then see if you enjoy it. Whether it gets recognised or not, I'm sure there are individuals more intelligent and experienced than me who would be able to answer that.

Q) Back in April, NODWIN GAMING presented the first-ever BGMI LAN All Stars Invitational. And now you're all set for the next one. What will make this one different or unique from the first for the fans watching?

A) Live on television! That's all. Larger audience, larger viewership. Previously, if I was experiencing all of the excitement by myself, I couldn't explain to the person next to me why I was getting goosebumps. Now that I have a bigger screen, I can do it all. This is what will change, and this is what will happen with the way people consume esports.

Q) Digital Media is certainly the go-to way since the pandemic and home to esports content so far. Taking it to Sports Television, how do you expect it will perform and the reach be like?

A) We're not worried about digital, and with Loco and Glance on board, it'll be there all the time. We are not depriving people who prefer to watch it on their smaller screens. We're not setting a standard or aiming for a specific amount of viewers since we honestly don't know. All we know is that people will enjoy it, and the more likeable it is, the more people will start watching it.

We're trying to include segments in the show that explain the game structure, tournament format, and particular terms related to the game so that viewers may begin to grasp it as a sport. More than viewership, making it more likeable is what we seek.

Q) How is the BGMI Masters Series positioning itself in the industry from the marketing perspective?

A) We're trying to be relevant here; we don't want to push messaging or an advertisement just because your audience is present. And by your audience, I mean the audience that could be described as a dark media audience that barely uses linear television.

Now they are watching on linear is because of somebody they want to follow and the sport that they love. That doesn't mean you'd want to send the same messaging that you would usually throw. To interact and connect with this audience, you must be creative. So, what is the appropriate message? If the brand wants to talk about being the fastest, take anything from the game that demonstrates that as a character or theme.

Many businesses have just recently become aware of the existence of esports. We are trying to talk to them and help them understand that this is what you should be doing. Let's consider: if an FMCG company wants to introduce a little pocket-sized deodorant pack and reach out to the audience, they must link it with a gaming accessory or an in-game inventory skin, which then becomes a property that the audience can relate to.

Q) Vishal you just joined NODWIN Gaming after spending 15 years building brands like HyperX and Kingston. Tell us about the many awesome things NODWIN has given you to work on?

A) Many awesome things! The first is what you're seeing right now, and there will be many more throughout the year. I can't reveal everything right away because it would cause too much excitement among the people. Let's have a good dose of excitement. Trust me, this is going to be the year of let's do esports.

Q) Do you think esports is ready for prime time?

A) Absolutely! No negative words I can put here. With Loco and Glance, millions of people would be viewing the BGMI Masters Series on digital platforms. The superstars have a large fan base here. Then there's the audience who wants to go back in time and address mom's questions about "what's in the game?" and "what are you doing on your phone all day?”. The answer to those questions is now available. This is where aspiration comes in.

At the BGMI Masters Series, these 24 teams are the 96 potential stars. One of whom was often hidden and not telling their family members. He now rushes to inform his father that he would be appearing on Star Sports. This is how it should happen, and certainly now is the time to be on prime time.

Q) Can we expect more esports tournaments to be televised from NODWIN Gaming?

A) Totally! This is just the first step of the message that we want to convey, and everyone at NODWIN Gaming believes that one day, esports will be the second biggest sport in INDIA after cricket, and it's all in the works.

Q) Can we expect an esports LAN event in Mumbai with a live audience anytime sooner?

We don't know! We are trying to organise events in accordance with the protocol because the pandemic is not yet over. We must ensure that we are safe, that gamers are safe, and that we do not go overboard with things. We will arrive as soon as we are ready and feel safe. Why only Mumbai? India is our playground, and eventually, we will go global. You never know, so never say never.

Disclaimer: The writing above has been adapted from the virtual meeting dated June 20th in order to suit to best fit a reader.