ESL Gaming announces ESL One Stockholm powered by Intel®, the first Dota 2 Major with a live audience in over two years

Featuring a $500,000 prize pool and 18 top Dota 2 teams, the tournament will conclude at the Hovet arena in Stockholm, Sweden 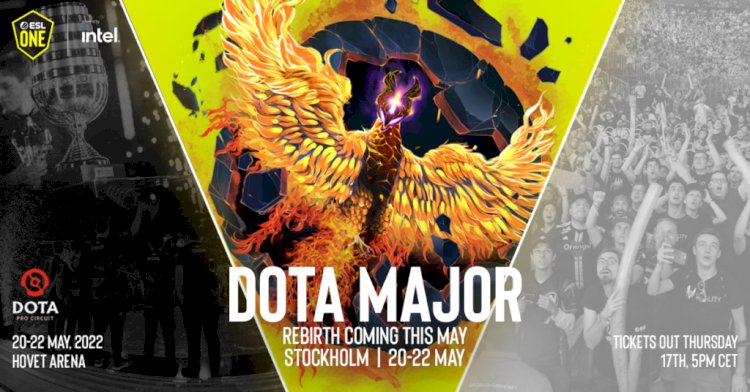 ESL Gaming, the world’s leading esports company, has today announced that it will host the upcoming Dota 2 Major as ESL One Stockholm powered by Intel®, on May 12-22, 2022. Fans are invited to watch and experience the finest Dota 2 action and cheer for their favorites live at the Hovet arena in Stockholm, Sweden, during the final weekend, May 20-22.

As the first Dota 2 Major event with a live audience since early 2020, ESL One Stockholm marks the rebirth of Dota 2 events with fans on-site. The tournament will conclude the Spring Tour of the Dota Pro Circuit (DPC) 2021-2022 season. The first Major of the current season, which would conclude the Winter Tour and was set to take place earlier this year, was replaced by six regional finals events produced online all around the world.

The Major features 18 of the world’s best Dota 2 teams from each Region’s Division I bracket with two to four slots available per region (China, Eastern Europe, North America, South America, Southeast Asia, and Western Europe). The teams battle it out to take home their share of the $500,000 total prize pool, as well as to earn more DPC Points in order to qualify for the renowned The International (TI) 11.

The group stage, which uses a best-of-2 round-robin format, sees the participating teams split into two groups of nine teams and will take place in a studio environment. The top six teams of each group will proceed to the double-elimination playoff stage where they will face off in front of the live audience at Stockholm’s Hovet arena to ultimately raise the trophy on May 22.

“It has been a long two years for Dota 2’s esports ecosystem, and we couldn’t be more excited to finally invite Dota 2 fans back on-site,” said Artem Bykov, General Manager, Game Management at ESL Gaming. “Organizing a Major is always special, but with so much at stake right now, ESL One Stockholm will simply be awesome. We can’t wait for it to get started!”

The ticket sale for ESL One Stockholm powered by Intel® will start on Thursday, February 17, at 5 pm CET. Day tickets are available from SEK 299 and three-day tickets start at SEK 899. More information about the different ticket types and how to secure your particular ticket can be found on esl-one.com/dpc/stockholm/.