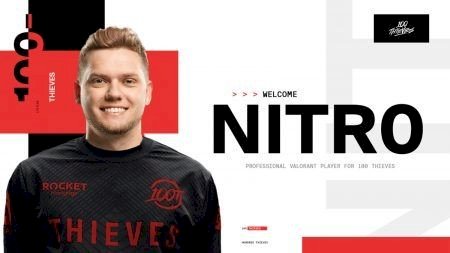 Former IGL of Team Liquid’s Counter-Strike: Global offensive roster Nicholas “nitr0” Cannella has decided to switch his grounds to Epic Games’ Valorant and he will be playing under the banner of 100 Thieves alongside Hiko.

nitr0, when this name comes in front of oneself, it always reminds of Team Liquid and his time with the organisation as he spent quite a long time sticking to it. nitr0 joined Team Liquid’s CS:GO roster back in early 2015 and was intact a few days earlier. nitr0 lead the charge as an in-game leader for the organisation and under his leadership Team Liquid became the #1 team in 2019, winning 8 tournaments under their name including the IEM Grand Slam which had a whopping prize of US$1 million. nitr0 wasn’t just an IGL but he is also known as an excellent all-round player who can adapt as per the situation.

“Excited is an understatement! I am so happy for this opportunity. Let’s make the best of it now,” nitr0 added on his Twitter account.

AYY LET'S GO BOYS! EXCITED IS AN UNDERSTATEMENT! I am so happy for this opportunity. Let's make the best of it now. #100T https://t.co/1hMVR0VTXf

100T’s original squad incarnated to life back in June but it failed to make any significant success and now the organisation is attempting to rebuild the squad with nitr0’s signing continues. nitr0 will be playing alongside his former teammate of Team Liquid in 2016, Spencer “Hiko” Martin. 100T’s have bid bye to former PlayerUnknown’s Battlegrounds pros Keane “Valliate” Alonso, Zachary “Venerated” Roach, Diondre “YaBoiDre” Bond, and Alfred “Pride” Choi from the roster.

It will be exciting to see the old-school CS:GO tag team once again of nitr0 and Hiko which helped them ensure a runner-up finish at the ESL One: Cologne 2016 Major. Will they be able to shake any grounds in Valorant is still a question as they will be playing against the likes of some big names such as FaZe Clan and T1.