BlizzConline will be an online convention which is set to take place on February 20-21, 2021.

After cancelling 2020’s BlizzCon amid COVID-19 pandemic, Activision Blizzard has now announced that they will host a replacement show completely online and named it “BlizzConline” which will happen online February 20-21, 2021. 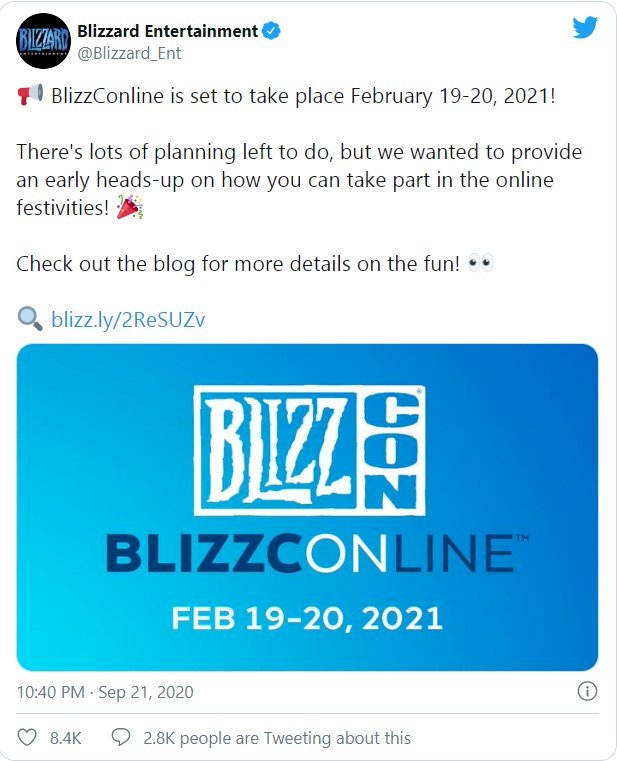 Details about the online event is scarce, there is no mention of esports or competitive tournaments as of yet but it will surely have engaging content consisting of major games updates of existing titles and exciting upcoming game titles. Here’s what we know and what Activision Blizzard announced as of yet:

Gear Up for the Community Showcase

In BlizzConline, The Community Showcase is an opportunity for cosplay crafters, artists, and other community creators to participate in the show and put their talent on display through a mix of world-class competition and exciting exhibitions. Since, it is an online event this will be accessible to even more people around the world enabling more participation and community engagement. Activision Blizzard is hosting a special event for fans around the globe called “March of the Murlocs” inviting fans to send in videos and images to participate.

This is a “just for fun” exhibition wherein you can showcase your talent. It is open to people of all skills levels. Since it is happening online, this gives them the opportunity to host pet cosplay exhibition as well. Cosplayers can also dress up as their favourite pet as well for this particular event.

Cosplay competition is one of the key highlights of the event, open to all cosplayers from amateurs to professionals all participate in this competition. Having put thousands of dollars in costume artistry this competition will have four various categories:

Judges will decide winners for respective categories and amongst all this, they will choose one overall cosplay winner who will be revealed during the live BlizzConline event.

Blizzard will take a look at original artwork made by artists, which open to all skill levels. Art submissions varies from valiant heroes, sculpting an iconic villain, illustrating a memorable moment from inside your favourite game or out.

Prizes will be awarded to first, second and third place winners. Their artwork will be broadcasted in a segment of BlizzConline live broadcast.

This contest invited aspiring digital filmmakers and moviemaking geniuses to create and original story-driven, short content based on Blizzard’s game universes. This means that you can create your own epic story with epic twists, imaging a fight between iconic in-game characters. Your short submission can feature animation, action, in-game footage or a mixture of all three.

Prizes will be awarded to first, second and third winners, also the winner’s story will be broadcasted during BlizzConline live broadcast.

Talent spotlight is an invitation for people to showcase their unique or extraordinary talents of Blizzard community worldwide. Originals acts solo or group can showcase their special talent in musical, physical, magical, whimsical forms.

To be considered for this competition, people can submit a video of themselves performing. Selected groups or people will be featured on the BlizzConline broadcast.

March of the Murlocs

Traditionally in Blizzcon events, people are seen masquerading as murlocs parading through the convention halls. To honour this tradition, Blizzard is inviting people to participate in this tradition which will now happen online.

In your submission, film yourself horizontally for (30-60 seconds) walking, marching or dancing dressed up as Murloc.