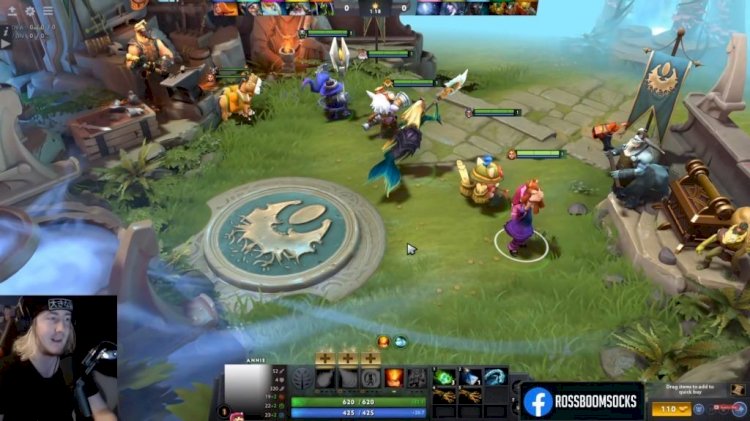 The debate war between MOBA fans of these games has raged for almost a decade now. Whereas there’s no concrete answer who wins but now a Dota 2 mod might put an end to this dilemma to an extent. It lets you merge both of the titles partly, meaning some of League of Legends champions are now playable in Dota 2 with the help of this mod.

If you ever wondered how LOL champions would look in Dota world, this mod is the answer. Mod is titled as “Dota 2 but League Heroes” and is brought to life by ’I don’t feel like playing’. The mod simply inserts characters from Riot’s MOBA to Valve’s. The mod came into limelight when popular LOL streamer Buba “RossBoomSocks” Corelli decided to give it a go and demonstrated it on his live stream.

The mod reimagines 28 different LoL champions into Dota. To name some, Meepo as Teemo, Annie as Lina, and Naga Siren as Nami.

When Corelli fired up the mod in Dota 2, he was shocked to see and exclaimed, “All these characters (Annie, Veigar, Teemo, Nami, Tristana) look bizarrely better than they look in League”. Further, he also noticed the height ratio of LoL heroes does not really go hand-in-hand with the structures of the game such as buildings and towers like Annie was barely visible as she wouldn’t meet the height requirement for the animated hero portrait which is shown in the bottom when you’re playing it.

Primarily a League of Legends player, Corelli took a moment to talk about some of the wider differences between the two titles, like being able to access mods officially is really interesting, “Just thinking in my head, all the fun stuff you could do if League had a custom games thing, and a custom lobby,”

“There are items in Dota 2 that you’d never see in a million years on League of Legends, I’m looking forward to trying them out,” he added.

Lastly, he noticed that using target abilities in Dota 2 is far more difficult compared to League of Legends and further commented that a Dota 2 match is comparatively lengthier so it concerns him,

“It was very, very fun in the beginning, but oh boy that was a long game, and that’s all I’m saying.”