On the occasion of Independence Day. 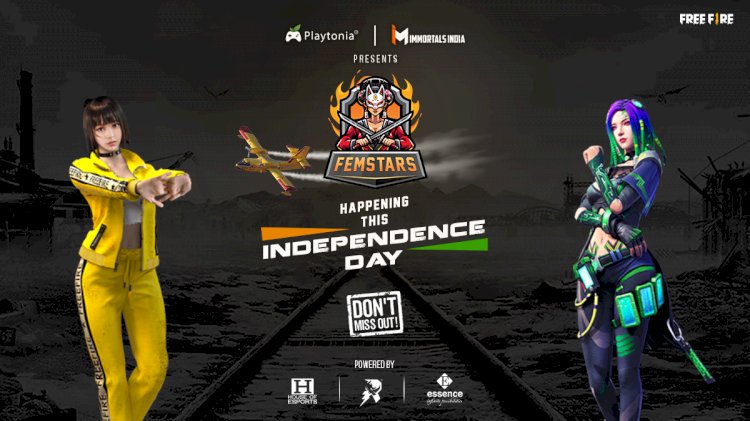 Immortals India & Playtonia Esports, alongside Essence Transmedia, House of Esports, and Resilience Esports have partnered to produce a tribute event for the Female Esports Athletes of India - FEMSTARS. India, being one of the oldest civilizations, with a kaleidoscopic variety of rich cultural heritage is now progressing rapidly in the field of esports and would soon be a force to reckon with in the Global esports scenario.

Femstars will be an invitational event, wherein 12 Female Free Fire teams would be invited to play a Best of 3 Series which would be broadcasted live on YouTube, with the sole intention of promoting the Female Gamers by providing them with a platform to showcase their talent, FEMSTARS would be a stage for emerging Female esports athletes to compete for their pride and will provide them exposure towards actual esports events or tournaments at large.

The teams are invited based on their previous participation in the local scrims. There has been a significant shortfall for female-only tournaments in the country and to remove the particular slack FEMSTARS will be the perfect platform. The current iteration of the event is completely based on Free Fire while the organizers are willing to take it forward with other trending titles as well, depending on the participation and final output.

“Esports is rising on an impeccable pace, but one could clearly see there is minimal efforts taken in terms of female only events. To fill this void Immortals India & Playtonia Esports came up with FEMSTARS and we are delighted to work with our partners namely Essence Transmedia, House of Esports & Resilience Esports for this event We have done such events in past and have positive plans for the future.” Quotes Jitesh Kharat, CEO & Founder at Immortals India.

The organizers are working with a broader perspective on such events, The backend team is working continuously to provide more such events in near future and also to boost female participation in upcoming esports events. The entire team of FEMSTARS is grateful and would like to thank all the partners and brands involved in the project for their active contribution towards uplifting the scenario.