Not one but two nominations. 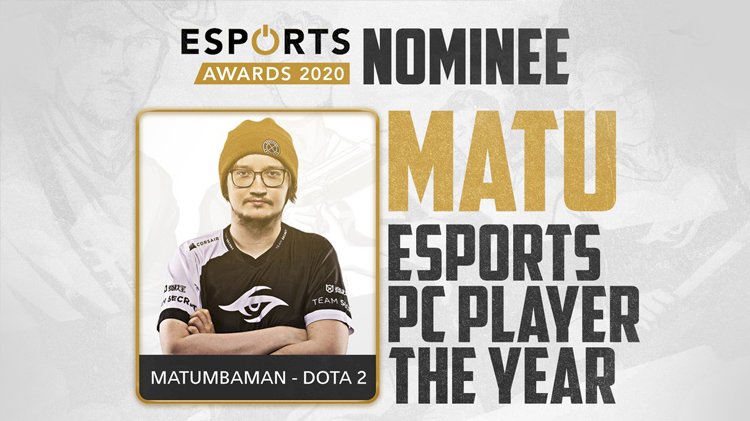 The Esports Awards is dedicated to showcasing top-class international performance and innovation from, amongst others; the players, teams, media, hardware providers, games, events and personalities within the scene.

In the Esports PC Player of the year category both of the Team Secret’s core players of their Dota 2 team, Lasse Aukusti "MATUMBAMAN" Urpalainen and Michał "Nisha" Jankowski are nominated alongside other 10 talents - Zywoo, Knight, Caps, Striker, Rampy, Bugha, David Tonizza, Sinatraa, Canadian, and Benjyfishy.

Team Secret has only been unstoppable with stomps from their end. 8 consecutive tournaments victories with a clean 3-0 victory in every Grand Finals. Starting with WePlay! Pushka League in April 2020 to the recently concluded OGA Dota PIT S3, they have 3-0 Team Liquid, Alliance, OG, Na’Vi, VP.Prodigy and Team Nigma.

Well, by the looks of it, it is not even about the win streak, it is about the constant performance like robots without a single mistake and outplaying the enemy every time. Yes, definitely Nisha is a beast at the mid lane and so is Matumbaman at carry position. Both of the cores take lion’s share of praise - also probably the reason being nominated. However, Team Secret is an all-in-all wholesome team.

Team Secret is currently participating at ESL One Germany 2020 and has already clinched a spot in the playoffs of the event winning three matches with a clean 2-0 in a best-of-three series against Tempo, Yellow Submarine and Team Liquid.

For the one's who want to vote in an attempt to make Nisha and Matumba victorious, can do so by heading over to the official website.